‘A Change Is Gonna Come’

Sam Cooke composed “A Change Is Gonna Come” in 1963, shortly after “I Have a Dream,” the Birmingham church bombings, and his own imprisonment for “disturbing the peace” after he was refused a room at a Holiday Inn because of his race. The song is considered one of the greatest of all time because of the way it captured the hope and despair of the Civil Rights Movement.

This year has been just as hopeful, despairing, and pivotal as the era Cooke described. With each spin of our planet, brave souls all over the world are carving deep grooves in the album of human history.

It’s ironic that video is the medium that’s catalyzed this new movement for social and racial justice, given Gil Scott-Heron’s Civil Rights-era proclamation that the “revolution will not be televised.” None of us can unsee the 8 minutes and 46 seconds of brutality that ended the life of George Floyd or Christian Cooper’s iPhone exposé of how white people can weaponize race in a New York minute or Ahmaud Arbery being hunted down like an animal. These and many other moving pictures are moving hundreds of millions of us—across all demographic categories—not just to anger but to action. 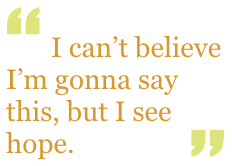 It’s impossible to predict where all this pain and protest will lead our society. History shows that any real, lasting change will take time, and it will have to be hard fought to achieve. But if the brilliant journalist Ta-Nehisi Coates is seeing a path to progress (“I can’t believe I’m gonna say this, but I see hope. I see progress right now, at this moment”), then so can we.

It’s encouraging to see people of all colors, all over the world, marching together in solidarity to make clear that enough is enough. The Atlantic article “America Is Already Different Than It Was Two Weeks Ago,” enumerates the ways our world is evolving before our eyes, including mayors of major cities announcing plans to cut police funding, top executives resigning for their poor records on racial equity, and NASCAR banning displays of the Confederate flag. University of Minnesota history Professor Saje Mathieu told The Atlantic, “I am not yet sure if what I’m seeing is courage or opportunism [on the part of people in power]. Either way, it’s a start.” Polls show that more than three quarters of Americans think racism and discrimination are a big problem, up a full 25 points since 2015.

We’re even seeing signs that philanthropy, notoriously impervious to external pressure for change, is responding to the urgency of Covid-19 and demands for greater equity. Yes, some foundations are making performative utterances full of sound and fury that will probably signify nothing in the long run. But we’re also seeing actions that speak louder than words.

Two weeks ago, five of the country’s largest foundations—Ford, MacArthur, W.K. Kellogg, Andrew W. Mellon, and Doris Duke—decided to borrow huge sums so that they can dramatically increase their payout at a time when the supply of funds is declining and demand for services is skyrocketing. “Covid-19 has created unprecedented challenges that require foundations to consider ideas—even radical ones that would have never been considered in the past,” Ford President Darren Walker told The New York Times.

At Ford, this decision will enable the foundation to nearly triple its already-huge payout this year. None of the money will go to adding staff or consultants; almost all of it will go to supercharging existing grantees on the frontlines of social change. Walker has been planting the seeds for this influential action for years, by remaking the board and executive teams he inherited. Both are now incredibly diverse, setting a new standard for our field.

Others are stepping up as well. Many wealthy donors, Black and white alike, are making large contributions to support those fighting racial injustice. On April 1, San Francisco-based Libra Foundation announced that it was doubling its giving this year, from $25M to $50M. This action was driven by Libra’s outstanding CEO, Crystal Hayling, whose father was a civil rights leader in Florida. The Schusterman Foundation, an important trendsetter in the world of Jewish philanthropy, and Blue Meridian Partners, which has the support of influential billionaires, are also significantly increasing their payouts. ABFE, also known as the Philanthropic Partnership for Black Communities, is generating undeniably serious support from Black executives and white allies for its push for foundations to increase “payout and employ various investment strategies to provide much-needed capital to Black communities.”

All of these actions are promising, but we’ve yet to reach a tipping point. “We have seen many calls to action over the decades,” says Venture Philanthropy Partners President and CEO Carol Thompson Cole. “In order to make real systemic change, we must develop the structures and actions to achieve change across sectors, do the work, and finally, keep each other accountable. If a structure isn’t created and we don’t continually hold each other accountable, the energy we are currently seeing will dissipate. It is hard work, but I am hopeful that together we can create real change.”

As for us, we’ll give time and resources to push for that real change. We’ll seek out meaningful ways to give of our time and resources. We’ll learn and grow. We’ll bear witness. Most of all, we’ll shut up and listen.

As you compile insights on how to cultivate an anti-racist culture in your organization, please include the wisdom of Anthony Richardson, the executive director of the Nord Family Foundation. Richardson shares actionable guidance for addressing subtle racism in the workplace. We’ll highlight one of his cautionary notes here: “I humbly ask that all foundation leaders refrain from … efforts to ‘fix’ or ‘address’ racism by bombarding a person of color in the office with the laborious task of educating the organization on diversity, equity, and inclusion or the history of race relations in America.”

If you’re seeking good information on Paycheck Protection Program (PPP) loans, check out this compilation of advice, resources, and sites. It comes from a robust online conversation in the Leap Ambassadors Community sparked by Tipping Point CEO Sam Cobbs.

If you’re seeking insights on how to respond to COVID-19 in an equitable way, check out this curated advice from the Leap Ambassadors Community, courtesy of Michael McAfee, Christine Robinson, and Schroeder Stribling.

Kudos to CEP’s Phil Buchanan on his BoardSource blog post “Leading an Organization Through the COVID-19 Crisis.” It’s a two-minute read packed with great advice, such as “empower folks to be creative,” “check in with people one on one,” and “question all the usual operating assumptions.” (Phil’s insights track well with the advice we offered in this post.)

In “Trauma-Informed Practice Must Integrate Anti-Racist Work,” Positive Education Program CEO Habeebah Rasheed Grimes acknowledges the way her team and other providers of trauma-informed care can do more to acknowledge and address not just clients’ direct experiences of racism but also trans-generational experiences. “This disturbing moment in America is a watershed moment for all of us, even at an institution like Positive Education Program, which was founded to advance social justice,” she writes. “In our work as an organization and as a society, we must ask the question, ‘What has happened to Black and Brown people in our country over the last 400 years?’”

June 25 — Online
“Crisis in Context: How to Reshape Funding Conversations for the Future” webinar; Social Solutions

July 1 — Online
“Dos and Don’ts of Communicating with Your Community During COVID-19” webinar; GrantSpace by Candid