In the 1980s, when Lowell was a teenager in the Maryland suburbs, he did a dumb thing and got himself into trouble with the law. Late one evening, he and a friend snuck onto a canal barge in Rock Creek National Park. They got busted by two federal policemen on a charge that carried a maximum penalty of six months in prison and had to appear in front of a federal judge a few weeks later. They got off with less than a slap on the wrist. 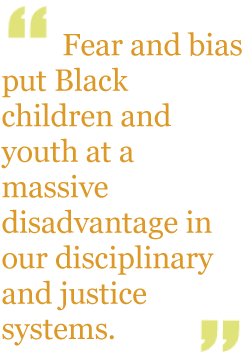 In all likelihood, the outcome would have very different if Lowell and/or his friend had been Black. This isn’t just politically correct speculation. In today’s America, fear and bias put Black children and youth at a massive disadvantage in every aspect of juvenile discipline and punishment.

This hard truth is the inescapable conclusion from the new book The Rage of Innocence: How America Criminalizes Black Youth, by Georgetown University legal scholar and longtime juvenile defense attorney Kristin Henning. We learned about the book from the brilliant James Forman Jr. and David Domenici, our longtime guides to the world of juvenile justice and injustice. As Forman told us, “You have to read Kristin’s book. It’s terrific. It combines stories from her 25 years in practice with social science research and legal precedents, which together form a devastating indictment of juvenile justice in America.” After reading the book, we fully agree.

These and the many other data points are damning. But the parts of the book that had the greatest emotional impact on us were the many stories of Black boys and girls not being given the benefit of the doubt by teachers, principals, police, judges, parole officers, and correctional officers—and then suffering lifelong consequences as a result. The most powerful story of all is one Henning withholds until close to the end of the book—the story of her own brother’s death in a Tennessee prison. “I can assure you that [my brother, who was Black] started off just like any other teenager—making impulsive decisions to be cool with his friends, experimenting with drugs, and testing boundaries and limits,” she writes. “I can’t help but wonder if my brother’s path would have been different if he had been treated like a typical teenager instead of a deviant criminal when he made his first mistakes.”

In addition to presenting a powerful fact pattern and compelling stories, Henning also does an outstanding job of outlining solutions—including many championed by Forman, Domenici, and other nonprofit youth advocates. For example, we need to ensure that every child has an “irrationally caring adult” (Henning’s term) in their life … help young people develop a strong, positive racial identity, because research demonstrates that doing so helps young people overcome adverse experiences and set higher expectations for themselves … reduce barriers to mental health care, especially those who have experienced severe trauma … change police training and accountability … and embrace better approaches to behavior change, such as the evidence-based restorative-justice approach pioneered by outstanding nonprofits like Roca.

These reforms won’t be easy. That’s because our society is lousy at acknowledging, much less examining or repairing our flaws. But leaders like you can help our society look squarely at our better angels and worst demons—not just in the justice system but in each of us as individuals. We’re all complicated human beings with conscious and subconscious minds composed of fifty shades of gray. We all have primitive brain regions coursing with powerful emotions like fear and shame. We’re all works in progress.

We commend the Center for Effective Philanthropy for continuing to shine a spotlight on foundations that have made meaningful changes in response to the crises of the past two years. In CEP’s newest publication, In Their Own Words: Funders Share Stories of Change, we see more positive signs that many foundations are streamlining processes and using “racial equity” as an explicit consideration in how they conduct their work. We learned a lot by reading the firsthand accounts of meaningful change at eight foundations, most of which are not “likely suspects.” One good example: The Mortenson Family Foundation, in Minneapolis, “invited community members to join [grant] committees, historically composed exclusively of board members.”

Two well-known foundations that have made meaningful changes are the Robert Wood Johnson Foundation and the Annie E. Casey Foundation, as described in the Medium post “Reflections on Responsive Grantmaking in the Wake of the Pandemic.” We were impressed that RWJF’s emergency grantees didn’t have to provide any narrative reporting and “only had to submit one final financial report with one line for total amount spent.” We also liked seeing that both foundations used an intermediary (the Urban Institute) not just to administer the grants but to add strategic value for grantees: “Experts in data science, housing, transit-oriented development, and food security … helped grantees bring new knowledge and expertise to the implementation of their grant projects.”

Kudos to the Advancing Early Education Collaborative—an innovative partnership of educators, nonprofit service providers, and funders—on winning a $5M Advancing Cities grant from JP Morgan Chase. Thanks to the complementary skills of the collaborative’s partners, the collaborative has a great opportunity to develop a sustainable business model for scaling early education throughout the Greater Washington region.

Both of us have served on the boards of schools, and so we read James P. Kubacki’s new book Choose to Lead: A Practical Guide for Educational Leadership with great interest. Kubacki, the president of St. Edward High School (Lakewood, OH), has captured the most valuable lessons from his decades as a visionary leader, across multiple school settings. The book is of great value for anyone involved in setting students up for success, but it’s essential reading for anyone who’s taking on the awesome responsibility of running a school.

We’re admirers of Management Leadership for Tomorrow CEO John Rice, so we were eager to read his latest LinkedIn post, “What It Means to Be ‘All In’ On Black Equity: Takeaways from Top C-Suite Executives.” We learned, for example, just how high consumers’ expectations are for corporations to take meaningful steps to improve their diversity, equity, and inclusion (DEI). Even among conservative consumers, nearly two thirds expect companies to take a stand when it comes to DEI. If your organization is serious about DEI, please take a look at the clear, comprehensive certification program Rice’s nonprofit has developed.