A Tribute to a Giant

Editor’s Note: Last week, the world lost two intellectual and moral giants, one who was 6’ 7” (Bill Gates Sr.) and one who was only 5’ 1” (Ruth Bader Ginsburg). Both deaths hit us hard. While we never had the honor of meeting RBG, Bill Sr. was a mentor to Lowell. So in the essay below, Lowell shares a few personal reflections on Bill Sr. and his towering legacy.

Shortly after I began working in the Gates Foundation’s East Coast Office in 2003, I traveled to the foundation’s headquarters with my boss, David Lane. David insisted on popping by Bill Sr.’s office so I would have a chance to meet him. Based on my time in politics, I was prepared for a perfunctory “meet and greet.” Instead, Bill Sr. immediately dropped what he was doing and engaged me in a long conversation. He was interested in my life and ideas—not just my resume and role. Bill Sr. gave me the benefit of the doubt from that first meeting, which continued for my entire tenure at the foundation and beyond. It’s hard to describe just how much I appreciated his support or how much it mattered when I had to present ideas to his son, who can be tough!

I suspect that literally thousands of people here in Seattle have similar stories about Bill’s kindness, humility, generosity, encouragement, and mentorship. I’ll share one such story that made me cry when I first heard it years ago. My first mentee at the foundation was a brilliant young man named Ryan Rippel, who is now the director of the foundation’s work to alleviate U.S. poverty (small job!). Ryan worked for Bill Sr. for a few years before going to law school. A few months before Ryan’s graduation, Bill Sr. called him and said, “Ryan, it occurs to me that you don’t have a large family to celebrate graduation with you this spring. I’ve decided that Mimi and I are going to come to Boston and be there to watch you graduate.” Ryan had lost his dad in a car accident, and his mom died from breast cancer. Bill Sr. remembered all of that and wanted to show up for Ryan on that big day.

These vignettes speak to the values he brought to his global work. I don’t want to take anything away from Bill and Melinda, who have huge hearts and brains. But Bill Sr. was just as essential to the successes I witnessed in my time at the Gates Foundation. He was the one who started the foundation’s global health work. He created the influential Gates Cambridge Scholars program. And he was the leader of the foundation’s smart, compassionate investments here in the Pacific Northwest. Just as important, he was the number-one culture leader at the foundation. For example, my friend David Wertheimer once saw Bill Sr., who was a bearlike 6’7” and in his 80s at the time, get down on the floor to pick up a can of soda that had rolled under a refrigerator. Bill Sr. always led by example. 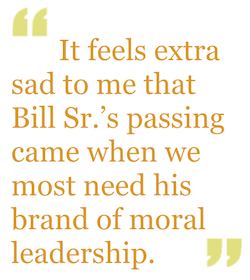 In his book The Road to Character, the columnist David Brooks describes two different accounts of Creation, each of which aligns with different sides of human nature. The first side, which Brooks calls Adam I, is the side of our nature that focuses on “resume virtues” and career accomplishments. Adam II, in contrast, “wants to … sacrifice self in the service of others, to live in obedience to some transcendent truth, to have a cohesive inner soul that honors creation and one’s own possibilities.”

Bill Sr. had an incredibly long list of Adam I accomplishments in his remarkable career in the law, civic leadership, and philanthropy. But from my vantage point, what really mattered to that humble man was his Adam II side and passing that along to his family, colleagues, and community. It feels extra sad to me that Bill Sr.’s passing came at precisely the moment in our nation’s history when we most need his brand of Adam II moral leadership. What a loss! What a life!

With grief and gratitude,

Lowell Weiss is president of Cascade Philanthropy Advisors, co-editor of Leap of Reason, and advisor to the Leap Ambassadors Community.

We just had a successful launch of The Big Reset, a set of resources to help nonprofit leaders and funders focus on what really matters at this moment of crisis and chaos. It contains three parts: suggestions for nonprofits, suggestions for funders, and a triage tool to help nonprofits prioritize action items. Leaders who have given The Big Reset a “test drive” tell us that it’s helped them in practical ways during the most stressful times in their careers. It’s spurring the right conversations between executives and boards. It’s surfacing issues leaders haven’t yet considered. It’s accelerating mission-critical decisions. We’re grateful to all the Leap Ambassadors and other leaders who contributed their valuable insights!

BoardSource exec Jim Taylor offers great guidance on “Recruiting for Board Diversity—Without Disrespecting People of Color.” Without calling out anyone by name, he acknowledges that his insights are informed by two hurtful experiences. Here’s one of them, in brief: “After listening to the board member’s ‘pitch,’ I asked him to share the ways he thought I could add value to the board; I wanted to know what prompted him to reach out to me, specifically. The board member seemed surprised and unprepared to answer the question and just re-stated his board’s focus on becoming more diverse…. I was being recruited because—and seemingly only because—I was Black.” Taylor then offers a list of insightful questions for boards to help them develop smart, respectful approaches to diversifying their membership.

Kudos to donor Susan Sandler for stepping up at this moment of racial reckoning. As you may have seen in this New York Times article, Sandler announced a $200 million gift for combating systemic racism and building civic power, especially in the South and Southwest. We applaud her thinking about how her resources can do the most good: “Rather than trying to use persuasive papers and reports to attempt to change the minds of those who are making decisions, the more effective way to transform societal priorities [is] to make the faces of the people with whom policy makers have to interact reflect the full racial, cultural, and economic diversity of the population that is affected by those policies.” We’ll be following Sandler’s investments with interest.

Chuck Feeney, one of Mario’s greatest heroes and role models, has just completed his incredible run. No, he didn’t pass away, thank goodness. Instead, his formerly anonymous and now revered Atlantic Philanthropies gave away its final dollars. As Forbes reports, “He has nothing left now—and he couldn’t be happier.” If you, too, are a fan of Feeney’s, we encourage you to watch this short, powerful video, which features the Feeney quotation, “I’ve concluded that the only purpose for wealth is to improve the human condition.” Feeney truly lived this belief!

Last week, we had a fascinating exchange with Johns Hopkins Professor Lester Salamon about “Philanthropication thru Privatization” (PtP), which has the potential to create vast new resources for advancing social change. To explain the concept to American audiences, Salamon has just chronicled the creation of Spain’s ”la Caixa” Banking Foundation, which is now the third-largest foundation in the world, with a $29 billion endowment. We agree with Salamon that the PtP concept has legs here in the U.S. Whenever lawmakers decide to privatize valuable public assets, such as auctioning parts of the broadband spectrum, they should automatically set aside resources for impact-driven philanthropy.

Philanthropist Jeff Raikes speaks uncomfortable truths in his Forbes.com column “Dear White CEOs: It’s Time to Lead on Racial Justice.” We always pay attention to Raikes and his wife, Tricia, because they have truly exemplified “practicing what you preach.” In Jeff’s latest column, he preaches, “I know firsthand that talking about race, particularly as a white leader, can be fraught. But the advice I can share with others wading in is be humble, be open, and admit where you have screwed up. Share how your learning is changing how you think. Because you don’t have all the answers. You are on a steep learning curve. I am, too.”