We know it’s not everyone’s idea of a beach read, but we both just read and loved The Sum of Us: What Racism Costs Everyone and How We Can Prosper Together, by former Demos President Heather McGhee. We came away thinking that social-sector leaders who don’t factor McGhee’s brilliant insights into their advocacy work might as well be trying to solve physics problems without accounting for the force of gravity.

Drawing upon extensive qualitative and quantitative research, McGhee demonstrates the multitude of ways the policy interests of working-class Black, Brown, and white Americans are highly aligned—despite the fact that our politics are so divided along racial fault lines. McGhee’s explanation for this paradox: Working-class white voters have been sold a bill of goods and grievances by extremely wealthy Americans “hoping to keep people with much in common from making common cause with one another.”

McGhee makes a compelling case that cynical political donors and politicians have convinced working-class white voters that new investments in public goods like schools, hospitals, parks, and job training will just be exploited by the “Undeserving Other.” “It’s often unconscious, but their perception of the Other as undeserving is so important to their perception of themselves as deserving that they’ll tear apart the web that supports everyone, including them.”

The central metaphor of the book is the public pool. In the early part of the 20th century, communities all over the country created huge, gleaming public pools as part of a conscious effort to improve the quality of life. But when Black citizens started to demand access to these facilities in the 1950s, thousands of communities in the North and South alike filled in the pools rather than share them—depriving not just people of color but white families as well. Consciously or unconsciously, they cut off their noses to spite their faces.

McGhee shows the many ways in which this drain-the-pool instinct is alive and well today—not just a relic of America’s Jim Crow past. 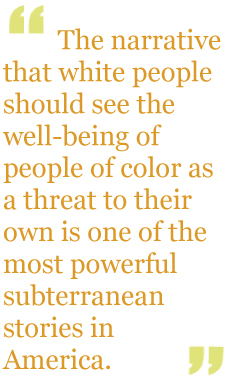 One of McGhee’s vivid examples of drain-the-pool politics comes from American healthcare—a classic public good that the COVID-19 pandemic exposed as woefully underfunded and disjointed. In recent years, 38 states opted to help millions of their uninsured citizens by expanding Medicaid eligibility, tapping into funds that come almost entirely from the federal government. But 12 states, all with heart-breaking healthcare challenges among their white populations as well as communities of color, refused. McGhee asked a veteran organizer “what arguments her state’s leaders made for turning away money to help solve that state’s worst-in-the-nation health coverage crisis.” The organizer told her that legislators often say things like, “These freeloaders … are just gonna come out from everywhere … asking for stuff.”

Despite it all, McGhee sees the glass as half full. Three years of travels for the book allowed her to visit with communities that have challenged zero-sum thinking and found formulas that work for achieving a “Solidarity Dividend” in the form of cleaner air, more accessible healthcare, higher wages, and rejuvenated downtowns. She often found these communities in places you wouldn’t expect—like parts of Maine that were previously all white and now are home to many Somali refugees and a conservative Texas city that has embraced a painful but profound “Truth, Racial Healing and Transformation” effort. (McGhee knows the Texas example particularly well, because her mother, Dr. Gail Christopher, spearheaded it.)

The bottom line for those of us who have dedicated our careers to building stronger, more equitable communities is that we must recognize that “the narrative that white people should see the well-being of people of color as a threat to their own is one of the most powerful subterranean stories in America.” If we join together across race and class to unearth this narrative and dismantle it, we’ll no longer be majoring on minors. We’ll have a real opportunity to reengineer our economy for much broader prosperity across all races and classes.

With a desire to increase Solidarity Dividends,

As its name suggests, More in Common is working to address the issues Heather McGhee illuminated. Its newest report, Two Stories of Distrust in America, paints a disheartening picture of just how much work needs to be done to build bridges of trust between communities of different races and ideologies. But it also provides valuable insights for the many communities working to combat the two major forms of distrust: ideological distrust (“us vs. them”) and social distrust (feelings of a lack of belonging, dignity, and equality). “A comprehensive strategy to build trust would catalyze a virtuous cycle wherein efforts to reduce ideological and social distrust reinforce and accelerate one another,” the report says. “As trust levels grow in our communities and the nation, it will make it easier … to address urgent challenges such as invigorating economic growth and addressing issues of racial inequality.”

PolicyLink and the Bridgespan Group have done a great service by offering concrete advice for funders on “Moving from Intention to Impact: Funding Racial Equity to Win.” The report focuses on structural, rather than incremental change. One of the key recommendations, which we fully endorse: “Funders should share how much of their funding is going to racial equity work—including how much is going to structural or systems-change efforts, to organizations led by people of color, and in multiyear general support.”

In “COVID-19 and student learning in the United States: The hurt could last a lifetime,” McKinsey and Co. are the bearers of bad but important news on COVID-19’s impact on the achievement gap between white students and their Black and Brown peers. Based on a statistical model with reasonable assumptions, the average learning loss during COVID-19 is seven months for all students but 10 months for Black students, 9 months for Latinx students, and more than a year for low-income students of all races. McKinsey estimates this will worsen existing achievement gaps, increase dropout rates, and exacerbate hard-to-quantify issues (e.g., social and emotional disruption).

Speaking of McKinsey, Byron Auguste, a McKinsey alum we greatly admire, just penned the Washington Post op-ed “The majority of Americans lack a college degree: why do so many employers require one?” Auguste introduced us to a valuable acronym: STARs, which stands for “skilled through alternative routes.” He reports that 70 million workers are STARs who received training through paths such as military service, certificate programs, community college, and on-the-job training. “These three seemingly innocuous words — ‘bachelor’s degree required’—are causing serious damage to our workers and economy,” Auguste argues. “The damage falls hardest on Black, Latino and rural workers.” While we believe that degrees still matter, we agree with Auguste that this moment of racial reckoning requires employers to think more expansively about talent pipelines.

Sep 8–Online
“Past the ‘Friends and Family’ Board of Directors: Using Digital Tools to Recruit, Train, and Retain a Strategic Board” webinar; Nonprofit Hub