The LeBron of Philanthropy

In 2003, Mario’s hometown Cleveland Cavaliers made Lebron James the number-one pick in the draft. Even though James was right out of high school, he immediately went on to record one of the greatest rookie seasons in history.

MacKenzie Scott may just be the Lebron of philanthropy.

In her first full year of grantmaking, she’s skyrocketed to prominence—not only because of the size of her wallet but rather because of the ways she’s using her head and heart. We can see this clearly in her quiet, understated June 15 announcement of the latest round of grants she’s making with her new husband, Dan Jewett. 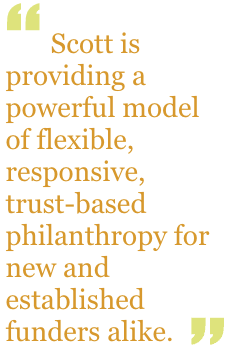 We both spend a lot of time offering advice to ultra-high-net individuals on equitable, effective giving practices. We’ve never met or counseled Scott or Jewett, but it’s wonderful to see them implementing many of the things we encourage, including the rare practice of starting to give before setting up a private foundation or other institution. Even though they’re trying to avoid media attention (“I want to de-emphasize privileged voices and cede focus to others,” Scott wrote on June 15), they’re providing a powerful model of flexible, responsive, trust-based philanthropy for new and established funders alike.

In the Leap Ambassadors Community’s Funding Performance monograph, Lowell wrote “Rising to Our Times: The Five Habits of Highly Effective Funders,” a synthesis of the common denominators among all ten positive-outlier foundations highlighted in these Funding Performance profiles. Scott and Jewett are showing early signs of embracing all five habits.

One of the five habits is providing flexible, multiyear funds that “enable grantees to strengthen the organizational muscles they need to deliver meaningful, measurable results over the long term.” Every single gift Scott and Jewett announced on June 15 aligns with this practice. “We chose to make relatively large gifts to the organizations named below,” Scott explained. “What do we think they might do with more cash on hand than they expected?… Find new creative ways to help. Hire a few extra team members they know they can pay for the next five years…. Stop having to work every weekend. Get some sleep.”

Scott and Jewett are providing this flexible support not only to likely-suspect organizations led by people with fancy resumes but also to lesser-known organizations led by people with strong community credentials. Thanks in part to their advisors at the Bridgespan Group, Scott and Jewett’s 286 new grantees include a disproportionate share of leaders of color, many of whom have never been able to attract money or attention from national funders despite their talents and results.

Another core habit is cultivating strong relationships with grantees and “allowing grantee leaders working at the ground level to drive the agenda in their own communities.” Again, Scott and Jewett are off to a great start. “We believe that teams on the front lines of challenges will know best how to put the money to good use,” Scott wrote. This type of giving “empowers receivers by making them feel valued and by unlocking their best solutions.”

We’re also impressed with Scott and Jewett’s self-awareness that their philanthropy was enabled by America’s winner-take-all systems. Commentators like the brilliant Edgar Villanueva have criticized Scott and Jewett’s giving as “less a sign of goodwill and more an indication of a system that is far out of whack,” but he doesn’t acknowledge that these criticisms are ones that Scott and Jewett fully embrace. “We are attempting to give away a fortune that was enabled by systems in need of change. In this effort, we are governed by a humbling belief that it would be better if disproportionate wealth were not concentrated in a small number of hands.” We suspect this sentiment is genuine.

McKenzie Scott and Dan Jewett are an incredible breath of fresh air. Will they be an aberration among donors? Only time will tell.

But sometimes we see the opposite—a deep desire to use wealth as a means to create greater equity in society by disrupting the systems that produced that wealth in the first place. Scott and Jewett are on that path. For the sake of our sector, we hope their successful rookie year of giving proves to be more than just beginner’s luck.

With admiration for donors who seed by ceding,

Molly Baldwin and her remarkable team at Roca are once again in the national spotlight for their remarkable anti-violence work with 17-to-24-year-old men. In the Boston Globe article “A Cure for Violence,” reporter David Scharfenberg shows how Roca is using a version of cognitive behavioral therapy (CBT) it developed with researchers at the world-renowned Massachusetts General Hospital to “rewire the traumatized brain.” Based on rigorous evaluations, we know that Roca’s CBT programming is helping young men find jobs and stay out of prison. Additional research now underway is looking at Roca’s impact on participants’ mental health—that is, when young men who have experienced serious trauma get triggered, what happens in their brains, and how do they use their conscious minds to respond? If these new evaluations show good results, we believe a massive scale-up of the Roca model play a big role in reducing violence nationwide.

The Pace Center for Girls has just released Building Equitable Evidence of Social Impact, which breaks down the benefits of engaging participants as true partners in evaluation. The study shows that holistic approaches to measurement that blend participatory measures with empirical data are an ideal way to understand impact in ways that no single experimental method alone could do. According to the report, nonprofits that gained the ability to add participatory evaluation into the mix “found that their cultures supported quick, smart shifts to new and virtual ways of listening to, and working with, participants to respond to trauma and injustice.”

Kudos to the Urban Institute on their new Measurement4Change Performance Measurement Playbook, which can help nonprofits of all types increase their ability to track performance data and use these data to fuel learning and improvement. The playbook is grounded in a set of processes and actions (e.g., logic modeling) that represent the most important steps nonprofits need to take. Urban makes clear that the motivation behind this playbook is not measurement for measurement’s sake. It’s to help “nonprofits … better engage their clients in decisionmaking, cultivate an organizational culture that values accountability, and strive for equity and inclusion within their organizations and for their clientele.”

In his latest Art of Association blog post, Hewlett’s Daniel Stid interviews Third Sector Capital Partners’s Caroline Whistler about the ways her organization has used self-reflection to adapt the way it helps governments focus on outcomes. One great example of self-reflection involves Third Sector’s work to design pay-for-success initiatives—a funding model that’s attractive to governments and philanthropists, because donors pay only when nonprofits achieve defined outcomes. “Basically, pay for success was great at bringing in government, philanthropy, and private investors to define the outcomes they cared about,” Whistler explains. “It was less good on what the community cared about.” Third Sector has now pivoted to different models that allow communities and beneficiaries to play a much larger role in defining problems and solutions.

In a position paper that probably didn’t pop up in your social-media feeds, Midwest BankCentre Chairman and CEO Orv Kimbrough offers a powerful case for companies to use this pivotal moment to find a guiding purpose that goes beyond simply earning a healthy profit. “Corporate purpose … is ultimately about tapping into and unleashing the soul power of a company. Purpose and profits are the only sustainable path forward for any enterprise over the long term. These two tethered together are an incredible force for attracting passionate, mission-minded and achievement-oriented people.”