‘Men Are Coming to Kill You’ 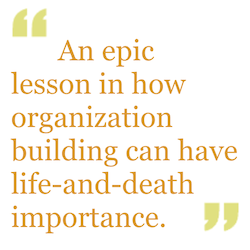 On an assignment from the Ford Foundation, Lowell traveled to the forests of Borneo to learn about the work of the Indigenous Peoples Alliance of the Archipelago (AMAN). The organization is one of the 300 grantees Ford supports through its $1B BUILD program, an ambitious effort to help nonprofits strengthen the core disciplines outlined in the Performance Imperative.

To experience AMAN’s work on the ground, Lowell visited the remote village of Sungai Utik in the company of Mina Setra, one of AMAN’s top executives. With AMAN’s help, Sungai Utik is finally on the verge of receiving full legal rights to its land and forest after two decades of David-and-Goliath struggle against powerful timber companies and government bureaucrats.

When Mina, a member of the Dayak Pompakng tribe, went to work for AMAN in 1999, she made only $15 a month, slept on her office floor, and landed in the hospital twice for malnutrition. But “I’ve always loved this work. It has given me purpose in life,” she explained. She lost her home village to industrial-scale palm oil plantations. Her work with AMAN gives her an opportunity to help millions of others escape a similar fate. She is now, at age 42, one of the world’s most forceful and effective advocates for indigenous rights and forest conservation.

In the village’s traditional longhouse, Mina acknowledged the dangers inherent in advocating for indigenous peoples. When she was only 25 and helping a community protect itself against an oil-palm company encroaching on its land, a confidant burst into the house where Mina was staying. “Men are coming to kill you! You have to leave right away!” She went into hiding, staying in a different home each night. But after two weeks, “I got on my motorbike, rode over to the company’s office, and stormed in. I demanded to see the person in charge. I said, ‘I am Mina Setra. He knows me.'” For some reason, the head of the operation agreed to meet her. “He was so shocked I confronted him. I could tell he was more nervous than I was.” That company never threatened her again, but hundreds of other activists have been killed for trying to protect their homes.

The relationship has had plenty of moments of tension. Mina and her colleagues bristle at some of Ford’s requests, and Ford sometimes wishes for a higher level of accountability. But Ford and AMAN have become thick-and-thin partners over two decades of work together. Millions of indigenous peoples—and the forests they protect—are the beneficiaries.

With appreciation for the dangers and hardships of nonprofit work,

Speaking of the Ford Foundation, we just received a briefing on Ford’s new research by Kathy Reich, Katie Smith Milway, and Chris Cardona on What It Really Takes to Influence Funder Practice, a topic of acute interest to us. Looking across 12 multiyear initiatives, Ford found that successful initiatives had the following common denominators: They involved doers and donors from start. They actively lowered barriers to adoption. And they had strategies for building will and skill. We encourage you to click on the link above and dive into the rich details.

Speaking of influencing funder practice, the Chicago-based MacArthur Foundation just raised the overhead rate it pays to grantees from 15 to 29 percent in an effort to help “destigmatize and correct misconceptions” by funders about overhead expenses. According to President John Palfrey, “Basic expenses are not only necessary to carry out the work but to grow and increase the work” of nonprofits.

We recommend two blog posts from wonderful colleagues at the Hewlett Foundation: Fay Twersky‘s “Why Funder Collaborations Are Powerful—and Harder Than We Think” and Daniel Stid‘s “We depend on well-led and well-managed grantees.” Fay’s post highlights recent research on what types of funder collaborations actually work—and why. And Daniel explains why Hewlett’s Madison Initiative, which focuses on strengthening our democracy, provides most of its funding in the form of multiyear, unrestricted general-support grants “that leave our grantees free to allocate costs to and invest in management capacity as they see fit.”

The Leap Ambassadors Community has just published guidance on how nonprofits can Develop Strong Fiscal Muscles for High Performance, based on insights from nonprofit-finance experts Dominique Bernardo, Wendy Foster, Ann Goggins Gregory, and Hilda Polanco. The guidance covers important zeitgeist topics such as scenario planning, building a reserve, and strengthening fundraising capacity. It also offers a list of additional resources on the topic.

The National Council of Nonprofits’ Tim Delaney and David L. Thompson have just provided an excellent guide to the federal, state, and local policy issues those of us in the social sector will want to watch this year. Their list includes the federal census, universal charitable deduction (aimed at those who don’t itemize), disaster relief, state minimum wages, and voting rights.