We can’t help but start with a few words about the Chauvin case. The jury’s verdict doesn’t indicate we have true justice in America. As our colleague Janeen Comenote remarked, “True justice would include George Floyd still being alive.” It doesn’t even mean that we can feel true relief. As another colleague confided and then agreed to let us share, “As a Black person, I didn’t feel comfortable leaving my house after the verdict was announced, because I didn’t want to be targeted. I’ve mostly only heard white people discuss feelings of relief—and I perceive that’s mostly about their excitement that riots won’t return and hurt many businesses.”

But of course it’s a positive that the jury saw Floyd’s murder for exactly what it was. And of course there’s a chance the jury’s swift and decisive verdict could generate more momentum for antiracist policies and practices that make the promise of “life, liberty, and the pursuit of happiness” a possibility for all Americans.

What can foundations do to build momentum to confront racial and economic inequality in America?

Most important, foundations must not return to the pre-Floyd, pre-COVID status quo. Moderna and Pfizer are making a huge difference in the fight to free us from COVID but of course will do nothing to free us from America’s 400-year legacy of race-based cruelty.

According to research by the Center for Effective Philanthropy and the TCC Group, many foundations responded to the converging crises by reducing grant restrictions, moving money faster, and focusing on racial inequities. But as Tonya Allen, Kathleen Enright, and Hilary Pennington recently wrote in The Chronicle of Philanthropy, “Nonprofits are now worried that the rubber band will snap back now that COVID is starting to recede. That would be a disaster for our sector!”

Foundations must increase their support for Black, Brown, Indigenous, and Asian leaders. In the words of funder and former nonprofit executive Sam Cobbs, “I can’t tell you how many times I saw organizations led by white Ivy Leaguers getting large-scale investments from the same foundations that gave us rounding-error grants—even when those organizations had outcomes inferior to ours.” 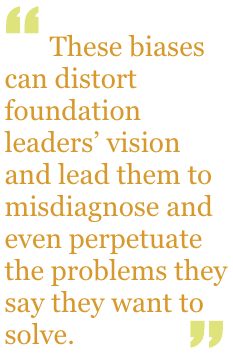 Providing these talented leaders with more capital, however, isn’t sufficient. Foundations need to think and operate differently in many other ways. Foundations are predominantly white institutions that typically have the same subtle biases that lurk within all Ivory Towers. They have networks that favor white candidates for board and staff positions, strategies driven by top-down processes rather than community-level knowledge, and an unconscious fear of dismantling structures from which their leaders have benefitted. As we know from our own work, these biases can distort foundation leaders’ vision and lead them to misdiagnose and even perpetuate the problems they say they want to solve.

For example, if a foundation is trying to improve educational outcomes but doesn’t do the work to uncover its blind spots, it might invest in “solutions” that fail to account for some of the unique barriers faced by Black and Brown students. This is exactly what philanthropists Jeff and Tricia Raikes discovered several years ago when they began deep introspection about their own
privileged vantage points. According to the former executive director of their foundation, “We used to think that all boats would rise [if we funded] an effective program. But … now see that many universal interventions work for those who are already doing well—not for those we really want to reach.”

We’re on this journey ourselves. It’s difficult, painful work. But we’re motivated to do it—not just because it’s the right thing to do but because we just can’t be effective if we don’t. Historical and present-day racial inequities are at the core of so many of the issues we’re addressing. To ignore these racial dynamics—and our own complex relationship with race—would leave us “majoring on minors” rather than addressing root causes.

Yours in the march toward equality,

To see effective, race-conscious philanthropy at work, please read the Leap Ambassadors Community’s “‘Tell Us What You Need to Succeed’,” a profile of Barbara and Ray Dalio’s outstanding Connecticut Opportunity Project (CTOP). The aforementioned Sam Cobbs, a Leap Ambassador, notes that “[CTOP] make[s] deep investments in terms of dollar amount and investing in the capacity of the full organization rather than just ‘buying’ programs.” Leap Ambassador Gordon Berlin, one of the most discerning arbiters of nonprofit effectiveness, notes, “I view CTOP as one of the most systematic and comprehensive approaches to nonprofit improvement and the unique challenges of scaling an intervention that I’ve seen.” The profile is the tenth installment in the Leap Ambassadors’ Funding Performance series, highlighting positive-outlier funders willing to support their grantees’ learning and improvement—and open to learning and improving themselves.

Huge kudos to Leap Ambassador Kathy Reich and the entire BUILD team at the Ford Foundation on the announcement that BUILD, our sector’s biggest and boldest initiative aimed at helping social-justice organizations become stronger and more resilient, has been renewed. Thanks to Reich’s leadership and the initiative’s success, Ford has committed another $1 billion to BUILD. Therefore, Ford program officers will continue to have the leeway to make large, flexible, five-year grants to help nonprofits strengthen their institutions for the long-term fight against inequality.

Paul Shoemaker’s great new book, Taking Charge of Change, introduces us to 38 diverse leaders—including many unsung heroes—who exemplify the skills, experiences, and mindsets America needs for rebuilding at this potential moment of productive pivot. All of these Rebuilders have big-time authenticity, an ability to deal with serious complexity, an organic generosity, a genuine embrace of data for learning and improvement, and experience and ease cutting across sectors. We love that Paul is promoting this type of leadership at this moment of potential pivot.

In “Why replication of positive RCT findings is essential,” the Arnold Foundation’s Straight Talk on Evidence initiative profiles two programs that showed strong outcomes initially but then diverged upon further review. Both programs focused on a critically important challenge: increasing college-graduation rates among low-income students. One of the programs, an Ohio replication of CUNY’s ASAP program, produced an impressive 16-point increase in graduation rates. The other program, Stay the Course, failed to show any statistically significant gains—despite the fact that the second randomized-controlled trial was conducted in the same community college system in Texas where the first RCT was done.

We were saddened to learn of the April 15 passing of the brilliant public intellectual Vartan Gregorian, the former president of the Carnegie Corporation of New York. Gregorian became a giant in the philanthropic sector after a long career as a university president and scholar of the Muslim world. It’s a sad irony that he passed away just days before Joe Biden declared that the mass killing of Armenians in 1915 was a genocide. The Armenian-American Gregorian fought tirelessly for the cause of genocide recognition.

May 4–Online
“The Road Ahead: How the Events of 2020 Might Shape the Future of Philanthropy” webinar; SSIR

May 13–Online
“Purpose-Driven Board Leadership: Reconceiving Board Governance” webinar; BoardSource