New Signs of Evolution in the ‘Galapagos’

Foundations are among the least responsive institutions in America. Even foundations that focus on sparking positive behavior changes in others (e.g., giving up smoking or eating a healthier diet) are remarkably good at resisting change themselves. As thought leaders Tom Tierney and Joel Fleishman wrote in their book Give Smart, “The absence of external accountability … means that if you do not demand excellence of yourself no one else will require it of you…. In this Galapagos Island–like world, where there are no natural predators, philanthropy is inclined to persist but not to excel.”

This is why we were surprised to see that COVID-19, the murder of George Floyd, and the subsequent awakening to the reality of structural inequity are provoking real changes in funder behavior, not just performative statements. This insight comes not just from anecdotal information we’ve picked up from philanthropy colleagues. The Center for Effective Philanthropy’s latest report, Foundations Respond to Crisis: Lasting Change?, which the organization teased in a webinar on November 4 and then released yesterday, points in the same direction.

In April and May of this year, CEP sent surveys to approximately 900 foundation leaders and got responses from 284 of them—201 of which were among the 800+ funders who signed the Ford Foundation and Council on Foundations’ “Philanthropy’s Commitment During COVID-19” pledge. To delve deeper into the responses, CEP then conducted in-depth interviews with leaders at 33 foundations. And to see if those foundation self-reports tracked with grantee experiences, CEP interviewed leaders at 32 nonprofits. 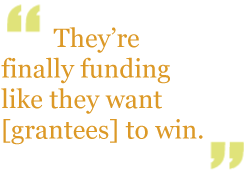 Surely there’s response bias in the findings. That is, foundation CEOs who are leading real change are more likely to fill out the survey than those who’ve been laggards. And yet, we don’t want to discount these findings too much. That’s because the nonprofit leaders whom CEP interviewed, who represent a wide range of geographies and fields, said that the findings were consistent with their experiences. The nonprofit leaders confirmed that they are seeing simpler application processes, more-streamlined reporting, greater flexibility, and more general-operating support. “They’re finally funding like they want [grantees] to win,” said one CEP webinar panelist.

We know that these important but modest changes in funder’s practices are not enough to solve the massive challenges we face, including a growing climate disaster and nearly Civil War-level cultural rifts. And yet, in the words of comedian Roy Wood Jr., “At this point, life is basically a crab leg, and we’re just all trying … to find that one little nugget of ‘feel good’ inside.”

So yes, we’re finding some feel good in these CEP findings. It’s like we’re visiting the Galapagos Islands of philanthropy and seeing hints of evolutionary change.

Wishing you a happy Thanksgiving (with no drunk-uncle rants),

Speaking of CEP, we salute longtime CEP executive Kevin Bolduc for his truth-telling blog post “Why Do We Bother?: The Tragedy of Foundation Reporting Requirements.” As his post’s title suggests, Bolduc scrutinizes the fact that the vast majority of funders impose brain-dead requirements that are overly burdensome and unhelpful even for foundation program officers. Because CEP has tens of thousands of data points on nonprofits’ views, Bolduc then offers a directional guidance on how funders can make reporting a valuable learning interaction between grantees and funders: “It’s when the reporting process is used to create engagement between funders and grantees about both grantees’ approach to their own assessment and the content of the reports they’ve submitted.”

As we alluded to above, we’re both extremely concerned about the country’s polarization—and we read all of Hewlett Foundation executive Daniel Stid’s writings on the topic. His latest post, “The Price of Union Hasn’t Changed,” provided us with valuable historical context and reminded us that in a country as large and heterogenous as ours the “decisions will … be slow, methods will be cumbersome, political parties will be illogical and inconsistent,” in the words of the historian Herbert Agar. Stid also gives us some insights into the vectors pointing in the direction of greater unity, including the many civil society groups and networks “dedicating themselves to depolarizing the country and reinvigorating pluralism.” We salute Stid for all he’s doing at Hewlett to supercharge these democracy builders!

Based on robust conversations within the Leap Ambassadors Community, the Leap support team has just published “Advancing Equity Through Feedback.” This action-oriented brief begins by acknowledging that “when poorly thought out and executed, data can be used as a weapon to screw over many communities,” in the words of nonprofit gadfly Vu Le. It goes on to outline feedback practices that do the opposite—that is, that use structured listening in service of equity. For example, it cautions leaders to look closely at outlier feedback: “Listen4Good-participating organization looked more closely at the minority of respondents who said they didn’t feel included and found that most identified as LGBTQ. The organization went on to learn that their language, services, and content were not inclusive nor were they meeting the needs of LGBTQ people.”

We applaud Exponent Philanthropy for breaking with their earned-revenue strategy and making their new report, Mind the Gap: Exploring the Role of Diversity and Racial Equity in Leanly Staffed Foundations, available at no cost. The report offers ample evidence of the #foundationsowhite phenomenon: 72 percent of foundations answering Exponent’s annual survey say they have zero board members of color, and 74 percent of respondents with staffed foundations report having zero paid staff members of color! Perhaps the most valuable finding of all is this: “Our survey data show a clear relationship between a focus on racial equity and good grantmaking and governance practices.”

The Urban Institute’s new Nonprofit Trends and Impacts report shows that nonprofits are also lagging badly on diversity, but they are making more progress than foundations. Urban shows that 70 percent of nonprofit boards have at least one person of color, and half of all members of nonprofit boards are women. Twenty one percent of executive directors are people of color, and 62 percent are women. One truly embarrassing statistic stood out for us: 16 percent of nonprofits that primarily serve people of color have all-white boards.

Dec 7–Online
“How to Power Up Your Communications Strategy with the Science of Systems Thinking” webinar; SSIR