The Link Between Humility and Effectiveness

In last month’s update, we mentioned that we were looking forward to reading Ford Foundation President Darren Walker‘s new book, From Generosity to Justice: A New Gospel of Wealth. We both chose to listen to the audio version while we got some much-needed holiday exercise. 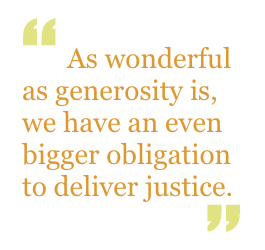 The original “Gospel of Wealth,” penned by Andrew Carnegie in 1889, implored titans of industry to give big. But Carnegie’s essay hasn’t aged well; it drips with condescension and noblesse oblige. Walker’s new Gospel of Wealth calls all of us to show more courage in addressing the root causes of our society’s ills. “As wonderful as generosity is, we have an even bigger obligation to deliver justice… confronting ourselves and examining the institutions, systems, and structures that benefit us.”

Walker’s moral authority derives in part from his life story. But he doesn’t weaponize his biography to shame others who have no lived experience of poverty or exclusion. In fact, he spends more time reflecting on his own privilege (American, male, educated) than on the hurdles he faced growing up poor, black, and gay in the South. Walker’s understanding of privilege is nuanced and multifaceted. For him, there’s no point in feeling guilt for our privileges or shaming others we perceive to have more than we do. The point is, “We must not be blind to our privilege, but acknowledge it and wield it for justice.”

Walker offers a great example—one learned the hard way—of why effective philanthropists need to examine their own blind spots. Shortly after he took over the helm of the Ford Foundation, he challenged all of his colleagues to reorient “all of our programming to address inequality in all of its forms,” an initiative he called FordForward. When he rolled out the initiative, several grantees called him out for his hypocrisy; the ambitious plan made not a single reference to people who live with disabilities. Walker was mortified. “I kept asking myself: How could I have overlooked this critical dimension of inequality? How could our entire organization have overlooked it?“

The chapter we appreciated the most was “The Ownership of Selflessness: Giving with Humility.” It was no surprise that the chapter includes the story of a business and philanthropy leader we admire deeply, Chuck Feeney. Warren Buffett once said of Feeney, “[He’s] my hero and Bill Gates‘s hero. He should be everybody’s hero.” Feeney has given away, with intentionality and impact, almost his entire $8B fortune. Although a lawsuit over the sale of his business wound up outing him, for years he did all of his giving in complete anonymity.

In making the link between humility and effectiveness, Walker shares a little-known aspect of Martin Luther King, Jr.‘s story. Walker argues that “the ‘savior’ persona that surrounded King—a persona he didn’t explicitly push back against—helped galvanize followers, but sometimes distracted from the movement.” Ella Baker, who toiled in King’s shadow, once asked him why he cultivated the image of the solitary hero. “King replied that it was simply what people wanted,” in Walker’s words. Walker speculates that the Civil Rights Movement could have accomplished more if King had shared the limelight with a range of role models, including more women and LGBTQ people.

We, too, have been thinking about the importance of humility for effective philanthropy. Like Walker, we’ve been studying Tricia and Jeff Raikes‘s journey of discovery. As the Leap Ambassadors Community shared in its recent profile “Growth Mindset,” the Raikeses have moved well outside their comfort zone to uncover their own blind spots.

In a few weeks, the Leap Ambassadors Community will share another remarkable example in its profile of Rose Letwin, who started Wilburforce Foundation almost 30 years ago and was as anonymous as Feeney for the first 25. One of Letwin’s grantees described her first meeting with Letwin this way: “Rose burst all my preconceived notions of what a [philanthropist] would look and act like… I vomited partially digested carrots on her and her staff while trapped in a small airplane, insulted her source of income, and injured her while on a trail ride. And that was all in a single day…. She handled it all in stride and kept wishing me well, thanking me for the hospitality while not really being able to take a full breath.” We know plenty of good people in philanthropy. We don’t know anyone else who would have handled insult and injury with such graciousness (including ourselves).

Now that the end of year is upon us, we’re taking stock of what we’ve accomplished and where we fell short. We’re looking at all of this work with a humility inspired by Walker, Feeney, the Raikeses, and Letwin. We’re working to be as introspective as we (and our shrinks) know how and trying to answer with deep honesty Walker’s great question: “Are we more concerned about others’ liberation or our legacy?”

With humility and warm holiday wishes,

Kudos to the Human Services Council of New York (HSCNY) for their gift of humor. For the second holiday season in a row, they’ve crafted a great video sendup of high-and-mighty funder behavior. It’s called “The Funder,” and if you see something of yourself in it, make it a New Year’s resolution to make some changes so you don’t get skewered by HSCNY next year.

In “Pew Fund Grantees Work to Improve Programs Through Better Use of Data,” Pew Charitable Trusts shares three short case studies from its Evaluation Capacity Building Initiative, focused on helping 30 Philadelphia-area grantees’ strengthen their ability to use data to improve services. The three cases cover Supportive Older Women’s Network, Ed Snider Youth Hockey Foundation, and Lutheran Settlement House. In each case, the organizations made significant strides in implementing new technology solutions and—far more important—shifting the organizational culture to value data as a tool for fulfilling its promises to its clients.

Results for America and MDRC have just shared a policy brief that’s valuable for all of us interested in career and technical education, an area getting renewed attention after years of being dismissed as lesser than traditional academic paths. One good piece of news is that “several rigorous randomized controlled trial (RCT) studies of Career Pathways programs have linked positive outcomes to the programs themselves, rather than to other factors such as the kinds of students participating in the programs.” Another is that the federal government is now doing more to encourage the use of data for choosing which programs to support, thanks to a law known as Perkins V, signed into law in July 2018.

We were pleased to see the discerning critic (and former Hewlett Foundation President) Paul Brest gave a ringing endorsement to our colleague Alnoor Ebrahim‘s excellent new book, Measuring Social Change. Despite a few quibbles, Brest calls the book “a major contribution to the field. It provides practitioners with a valuable framework for measuring and managing social change and sets a research agenda for future research in the field.” We heartily agree!

In “Why most non-RCT program evaluation findings are unreliable (and how you can improve them),” Arnold Ventures offers valuable advice for those who are working on quasi-experimental approaches to building evidence when randomized controlled trials aren’t feasible. The Arnold team offers detailed descriptions of designs that have been shown to produce results consistent with those obtained through expensive RCTs. They also call for researchers to “pre-specify and publicly register all study parameters … before examining any outcome data for the treatment versus comparison group.” The idea is to add a layer of objectivity. We know this looks like nerdy stuff only an evaluator could love, but we learned a lot.

Jan 16 — Online
“How to Market Your Impact” webinar; GrantSpace by Candid