Have you seen the new Netflix documentary “Inside Bill’s Brain: Decoding Bill Gates”? If you haven’t, you should! The film does a great job of illustrating how philanthropy can be, in the words of educator Paul Ylvisaker, “society’s passing gear.” It also offers great lessons for donors who don’t have Gates’s stratospheric wealth.

Let’s be clear: the series should not be considered journalism. (Nor, for that matter, should this review, given that Lowell has worked for Gates for more than a decade.) In exchange for two years of unprecedented access to Gates and his personal archive, the filmmaker Davis Guggenheim gave Gates some measure of veto power. But even if we don’t get a full, unvarnished picture, Guggenheim did a great job of coaxing stories out of Gates (who just doesn’t think or talk in stories) and weaving them into a compelling narrative about how Gates’s DNA, family influences, and early professional experiences helped turn him into the donor and doer he is today.

Here are a few of the film’s key insights that are instructive for other donors. 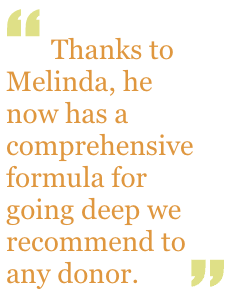 Gates is insatiably curious. In the words of former Microsoft marketing director Mike Slade, “He is joyous about learning things like no one I’ve met in my life. He doesn’t read one book about something. He’ll read like five books about something—most of which are too dense for any mortal.” Bill’s passion for learning isn’t just about reading and his solitary “think weeks” at his cabin on Washington’s Hood Canal. Gates also loves to bat around ideas with experts and conduct site visits. Truth be told, he probably wouldn’t be spending much time in the field if not for his wife, Melinda; his style is much more analytical than experiential. But thanks to Melinda, he now has a comprehensive formula for going deep we recommend to any donor.

Gates embraces risk. In episode two, Gates sits down to a hamburger lunch with Warren Buffett. (If you’re a Berkshire Hathaway investor, don’t look at how much salt Buffett uses!). Gates tells the legendary investor, “I’ve … put the foundation’s reputation on the line that we’re going to get smart and do whatever it takes” to eradicate polio. Buffett applauds Gates’s risk tolerance, even as he knows that eradication is proving much more difficult and costing much more money than Gates hoped. In each episode, Guggenheim highlights what Gates’s high-risk, high-reward philanthropy looks like in real life. In addition to profiling the polio-eradication campaign, Guggenheim focuses on Gates’s intense pursuit of better toilets and sewage-treatment plants for the poor (episode one) and his engaged investment in a “traveling wave” nuclear reactor that could help the world stave off the worst effects of climate change (episode three). Of course, there are very few others in the world who could make massive bets like these. But Gates’s approach—do your homework, invest in great leaders, rigorously gather data, double down when the going gets tough, and adapt as you learn—applies to a wide array of donors.

Gates looks for unique opportunities for impact. One might think that Gates would have chosen to focus his philanthropy on breast cancer research, given that he lost his mom to the disease the same year he started his first foundation. But he knew that lots of money was already flowing to cancer research. He realized that his dollars could have much more impact on conditions that disproportionately affect people in poor countries. Today, the vast majority of donors give to wealthy institutions from which they or their families have benefited (e.g., universities, hospitals)—opting for well-worn paths rather than potentially transformative opportunities. We wish more had the courage to embrace unpopular, underfunded causes where their dollars (as well as time and expertise) could make a bigger difference.

Finally, Gates is an inspiring role model. Gates has plenty of flaws and has made many missteps (such as exploring an ill-advised philanthropic partnership with Jeffrey Epstein). But he has a lot of impressive traits, including his willingness at times to admit making mistakes. Most of all, he’s a compelling role model for other uber-wealthy “hyperagents,” showing the ways that philanthropy can create meaning, purpose, and joy for those who invest themselves and not just their wallets. You can see it in every Gates site visit Guggenheim and his camera crew record. You can hear it in the questions Gates asks of the innovators he meets. You can feel it when Gates lights up discussing what he’s learning. In sum, Gates is using his super powers for good—and we’re grateful he’s doing so.

With admiration for all you do in your communities,

Despite our country’s partisan rancor, Democrats and Republicans are increasingly embracing evidence-based policymaking—especially at the state and local levels. You’ll see, well, evidence of this in 2019 Invest in What Works State Standard of Excellence, produced by Results for America (RFA). The report contains 125 examples of evidence and data use in state governments—a 50 percent increase from the number of state examples RFA found just last year. In addition to this retrospective look at state progress, RFA offers 17 ways the next President can accelerate economic mobility using data and evidence in its new Federal Policy Playbook for 2020.

We’re big fans of video for helping people understand what it takes to be effective in our sector. You can see a good example in this visual case study of how constituent feedback improves the work of Students Rising Above (SRA), a college-completion program for low-income students in the Bay Area. With support from the Irvine Foundation and the Fund for Shared Insight, SRA now makes a priority of listening to its participants and using what it learns to drive improvements in the program. As you’ll see in the video, the students themselves are seeing the difference, in the form of better communication and more focus on making the college-application process transparent. “I really appreciated that they wanted to hear what I thought of the organization and how they could better it for me,” one student remarks.

Arnold Ventures’ Straight Talk on Evidence initiative, which often splashes cold water on studies that purport to show impressive results, did the opposite when it examined a randomized controlled trial of a Canadian program for increasing high school graduation and college completion. The program, called Learning Accounts, produced “exceptionally promising” outcomes—“among the largest of any North American program evaluated to date in a high-quality RCT.” As a result, Arnold Ventures has released an RFP to fund an expansion of Learning Accounts to the U.S. as well as a “replication RCT” to find out whether the program can achieve strong results in a new setting.