The Wisdom of WINS Leaders

We have a term for foundation professionals who previously ran nonprofits: WINS leaders. WINS stands for “Walked In Nonprofit Shoes.” We believe WINS leaders have a big and important role to play in helping peer funders understand how they can better set their grantees up for success.

As a case in point, please take a look at “Are You Helping Your Grantees Succeed—or Trying to Catch Them Messing Up?,” by WINS leader and Tipping Point Community CEO Sam Cobbs. (Cobb’s essay is part of the new monograph Funding Performance: How Great Donors Invest in Grantee Success, by the Leap Ambassadors Community in partnership with Tipping Point, Ford Foundation, Hewlett Foundation, Bridgespan, and FMA.) Cobbs uses his new perch to call out funding practices that make nonprofit leaders’ lives a lot harder than they need to be.

Cobbs begins his essay with a story that will sound familiar to nonprofit leaders who’ve taken risks to establish rigorous measurement systems. Shortly after he became the CEO of Oakland-based First Place for Youth and implemented the organization’s first comprehensive data system, Cobbs showed his data to a prospective funder. “Your data show that drug use goes up when they participate in the program,” the funder said. “I can’t fund something like that.”

It turns out that the funder’s interpretation was dead wrong. As Cobbs explained to him, “Drug use was not going up. The reality was that we were finally building the kind of trust with kids where they were willing to admit that they were smoking weed…. We learned that we had previously given them incentive to lie to us. They feared that if they told the truth, we wouldn’t help them.”

Thanks to his new perspective as a funder, Cobbs sees that many funders do the same thing with their grantees—that is, they create incentives for them to lie. “They give grantees signals that they’re trying to catch grantees messing up rather than working to understand how they can help them succeed.”

Cobbs then describes an episode in which he took another smart risk as a nonprofit leader which prospective funders should have greeted warmly—yet he lost a huge grant instead. Cobbs decided to part ways with a paint-by-numbers accountant and hire one that could help First Place for Youth raise its financial stewardship to a new level. Cobbs reports that he “received the kind of audit report that I hope to God no other nonprofit ever gets. It looked like War and Peace; it was that thick.”

Tipping Point Community, the funding organization he now leads, leaned in to help Cobbs learn from the findings and then improve its financial systems. Another funder had the opposite reaction: It reneged on a $2M commitment that was critical for First Place for Youth’s expansion. “Our staff morale sank, and my own confidence took a big hit,” Cobbs acknowledges with vulnerability.

That ugly episode is front and center for Cobbs every time he meets with a grantee. “I try very hard to greet bad news with gratitude and curiosity rather than scorn or judgment—just as Tipping Point leaders did with me, seeing through the negative to ask about the ‘why.’” 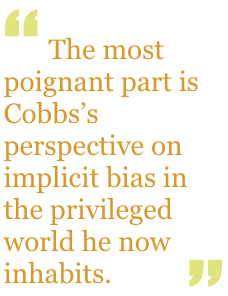 The most poignant part of Cobbs’s essay is his perspective on implicit bias in the privileged world he now inhabits. He shares the tale of two very different meetings he had with nonprofit leaders just a few weeks apart. In the first meeting, which he took at request of key Tipping Point stakeholders, “I got an elegant PowerPoint presentation befitting her background as a marketing executive in a large company. But when I dug into the details, I saw a fundamental discrepancy between what the founder said the organization had accomplished and what it actually delivered.”

The second meeting was with a leader with a lot less polish but with a great track record in her community. “I could tell that her work was based on a solid theory of change and was achieving tremendous outcomes. She was consistently landing contracts from her city government, but in seven years she had earned only $10,000 in philanthropic support.”

Yes, the first leader was white, and the second was Black.

Cobbs reports that he was often on the losing end of these same racial dynamics in his former life. “I can’t tell you how many times I saw organizations led by white Ivy Leaguers getting large-scale investments from the same foundations that gave us rounding-error grants—even when those organizations had outcomes inferior to ours.”

We call foundation folks who previously led nonprofits WINS leaders—for “Walked In Nonprofit Shoes.” It would be wonderful if more WINS leaders described their experiences in scuffed-up nonprofit shoes for the benefit of funders who’ve only experienced life in expensive wingtips and pumps. WINS leaders like Cobbs can speak truth to peers in power. And that’s one of the most influential ways of motivating the kind of practice changes that could make our sector more equitable and more effective.

Yours in examining implicit bias,

Kudos to BoardSource CEO Anne Wallestad on her new SSIR article, “The Four Principles of Purpose-Driven Board Leadership.” Wallestad issues a call to action for all of us to reframe the board’s role around four key principles: prioritizing the organization’s purpose rather than the organization itself, commiting to being a respectful and responsible player within the organization’s broader ecosystem, avoiding inadvertent reinforcement of systemic inequities, and recognizing that organizational power and voice must be authorized by those impacted by the organization’s work.

The city of Stockton, CA, has just shared the first round of results from a rigorous experiment in universal basic income—that is, giving cash directly to people in need. The experiment showed that the program significantly lifted employment for those who received the aid, one of the program’s chief aims. “When the program started in February 2019, 28% of the people slated to get the free money had full-time jobs. One year later, 40% of those people had full-time jobs.” According to one of the researchers, “These numbers were incredible. I hardly believed them myself.”

The Leap Ambassadors Community has released “Is Earned Income Worth It?,” a synthesis of hard-won lessons from leaders who have used earned income as a strategic opportunity. The piece features great wisdom from Lori Kaplan, Jill Vialet, Adriane Armstrong, G. Keymah Durden III, Brandon Chrostowski, Randy McShepard, and others.

We don’t often tout articles from medical journals in this non-technical newsletter, but “Effect of Layperson-Delivered, Empathy-Focused Program of Telephone Calls on Loneliness, Depression, and Anxiety Among Adults During the COVID-19 Pandemic” is worth the time of the human-service providers among you. That’s because the article, based on a randomized controlled trial, shows that you can train lay counselors to provide effective support for struggling clients. According to the authors, “Loneliness, depression, and anxiety were rapidly reduced through layperson-delivered calls that focused on empathetic listening, suggesting a scalable approach to persistent mental health challenges of older adults.”

For those of you who rely on federal funding, we recommend Daniel Stid’s latest blog post, “Reimagining the Light but Sturdy Ballast of the Pork Barrell.” Stid, an expert in good government, reports on the unintended negative consequences of a well-intentioned Obama-era ban on Congressional earmarks—an important issue we hadn’t been following. One of Stid’s key concerns is that the ban has “worked to loosen the ties binding legislators to the states and districts they represent. It has thereby helped accelerate the nationalization and polarization of politics threatening to pull the country apart.”

The Gates Foundation-funded Reimagine Charitable Giving Challenge, which awards up to $100,000 for digital innovations aimed at “everyday givers,” just announced the first winners. The Chronicle of Philanthropy highlighted several winners, including HasanaH, “which vets thousands of global nonprofits and fundraising campaigns in an effort to simplify faith-based giving on a single site,” and Coin Up, an app that rounds up credit-card purchases and gives the proceeds to charities.

Apr 14–Online
“How to Define Your Competitive Advantage and Transform Your Social-Change Organization” webinar; SSIR

Apr 27–Online
“The Ethos of Being Trust-Based: Reimagining Funder Roles in a Trust-Based Context” webinar; GEO