In 2019, the Leap Ambassadors Community began planning a May 2021 in-person conference for its nearly 300 social-sector doers, thinkers, and funders. When that became impossible, they pivoted to a virtual convening and discovered that rich, personal interaction is feasible at a distance. In this post, we’ll share what the community learned about making the most of a virtual convening and why we think these types of convenings will have enduring value even once in-person meetings can resume.

Benefit One: Participation was greater because the convening was virtual. Well over half of the ambassadors joined the convening, a greater percentage than would have been able to attend in person. Going virtual also meant that more ambassadors were able to lead sessions. In the plenary session that Lowell hosted, every one of the leaders he invited to participate (Jeff Bradach, Sam Cobbs, Hilda Polanco, Hilary Pennington, and Daniel Stid) was able to do so. It would have been a miracle to get all of these folks together in one city at the same time. The same is true for many of the other discussions. 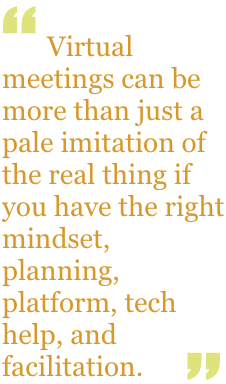 Benefit Two: “Hallway networking” actually worked online. The Whova and Zoom platforms have bells and whistles for bringing participants together for the kind of casual conversations that make even mediocre conferences worthwhile. When it comes to connecting with colleagues you already know well, there’s really no substitute for connecting in person. But meeting new people was actually easier and smoother online, especially for the introverts among us. At an in-person conference, you don’t get the benefit of Beth Kanter, a tech-savvy yenta, joining you with small groups of people you’ve never met, seeding your conversation with clever prompts, and then shuffling you into another small group every ten minutes to maximize your new connections. For both of us, these virtual meet-ups generated meaningful discussions and follow-up items. They didn’t feel stilted, awkward, or superficial.

Although the Whova platform didn’t get rave reviews from all participants, it allowed the Leap Ambassadors to turbocharge community-wide conversations during the event. Participants exchanged articles, offered support, and sparked ideas for learning and improvement through 400 different discussion threads, which would have been near impossible to capture in a physical setting.

Benefit Three: The convening saved a lot of time and money. The virtual convening cost organizers less than a quarter of what they would have spent on an in-person gathering. The convening participants collectively saved even more, given that they didn’t have to spend a dollar on travel or lodging. And then, of course, all participants got more time with their families and the gift of sleeping in their own beds.

Post-convening surveys back up these views. Here are a few representative comments: “I really appreciate how well the virtual format has worked.” “I loved the round-robin session and meeting 15 new people.” “The convening was a huge success, in my humble opinion.” “It was seamless and uncomplicated.”

Meeting in person will always be the gold standard for building relationships and trust. But we’ve learned that virtual meetings can be more than just a pale imitation of the real thing if you have the right mindset, planning, platform, and facilitation. They’re a worthwhile addition, especially for a community spread across many countries.

With best wishes and a virtual hug,

If you’re looking for a good excuse to get up from your desk without guilt, go take a walk and listen to Ford Foundation EVP Hilary Pennington’s great interview on the Heart of Giving podcast, hosted by BBB Wise Giving Alliance CEO Art Taylor. She discusses all the key themes from her essay in the Leap Ambassadors’ Funding Performance monograph. “The 20+ years I spent leading [a nonprofit] organization just gave me a deep and passionate conviction that the ways foundations fund organizations are not as impactful as they could be. In fact, they’re the opposite. The way most foundation funding goes out into the world makes organizations weaker rather than stronger.”

Kudos to Year Up founder and CEO Gerald Chertavian and his whole team on the strong validation they just received from the second major randomized controlled trial (RCT) on their organization’s work to help young people prepare for and succeed in jobs with a future. The first RCT showed “large, positive earnings impacts in the first three years after program intake.” This new follow-on report shows that “Year Up continued to generate quarterly earnings increases of nearly $2,000 through the end of the five-year analysis period”—positive results that were statistically significant for every subgroup and for all eight Year Up offices. The new study also included cost-benefit numbers that should make all workforce funders sit up and take notice: “The program’s total benefits to society at large over the same period exceeded total costs by $15,349 per participant, representing a return of $1.66 for every $1.00 spent on Year Up.”

If you’ve been reading about the increasing role of impact investing in philanthropy and want to understand what the fuss is all about, we suggest you pick up a copy of the new book 21st Century Investing: Redirecting Financial Strategies to Drive Systems Change, by our former colleague William Burckart and Steve Lydenberg. We wholeheartedly agree with the investment manager who commented, “Burckart and Lydenberg are the Wayne Gretskys of investing—showing us not where investing is but where it’s going: to systems-level investing.”

In a recent New York Times guest essay, Michele Jolin and Robert Gordon make a compelling case that “The American Rescue Plan has the potential to be the most effective social care package since the 1960s.” They explain that the key to making the most of this potential opportunity lies in how the funds are targeted. They recommend funding “initiatives with strong evidence of large long-term results,” “addressing racial and economic inequity,” and “measuring success.”